From what I can gather, I am not the only one who misses Gorton’s canned codfish cakes. The mixture came solid in a can and one only had to slice and fry them in butter or margarine for a real treat. When they started getting scarce where I lived, (and now are non-existent), I developed the recipe based on the label ingredients, which I share with you today. I think it is close to what you may remember.

Poach the cod by placing the filets in a deep flat pan and covering them with water.(Can be still frozen). Add 2 tsp. of salt and 1 Tbsp. lemon juice. Simmer until the filets are no longer translucent,(nearly clear), but opaque in color, (solid white). [ I used to wrap them in cheesecloth to prevent them from breaking apart while boiling but found that they are fine cooking a little longer at a gentle simmer, just under boiling.] Drain the filets and flake them in a mixing bowl.

Add premade mashed potatoes, [See Dec. 2012 Archive, You Can Do It…Breakfast Potatoes and Leftovers if you need instructions.] and milk and salt. Stir in the eggs, mix well and add the salt then sprinkle in the flour. Depending on the wetness of your potatoes and the absorbency of your flour, more may be required, but please do not expect the consistency of our belated, beloved canned codfish cakes: This mixture will be somewhat loose.

Melt butter or margarine in a large , flat pan or griddle,(preferably non-stick).Keep the pan on a medium-high setting and  pick up the cod mixture, roll into a loose balls and flatten before dropping onto the pan or drop the mixture by a large spoonful and immediately flatten with a spatula.( You need to make these rather thin). Leave the cakes cooking for some time until the bottoms are deep golden-brown and flip them gently with a ‘pancake turner’ once, and allow them to brown equally on the other side.(In the ones pictured,I went heavy on the option of parsley!) 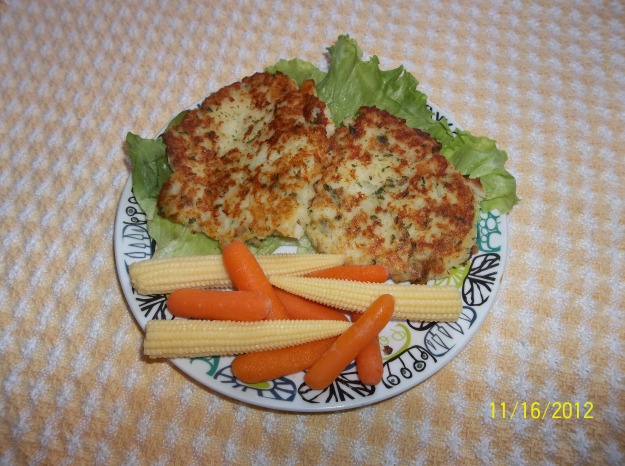 I hope that if you grew up loving codfish cakes as I did, these will satisfy you.

One of my son’s friends was a local fellow and one day we were discussing food,(which should be of no surprise). He complained that he had gone to a restaurant with his father somewhere in New England and he had tried to order biscuits and gravy, but the waitress had no idea what he was talking about. I told him that biscuits and gravy was a local favorite and that I had not learned to make sausage gravy until I had moved to Kentucky.
He still did not understand; after all, the restaurant had been one in a national chain and he had ordered the same breakfast at nearby locations many times.
I said, “But the menus vary; they feature local favorites. For instance, I was born in Maryland and if I walked into a restaurant here and ordered codfish cakes, they’d look at me like I am crazy”, to which my Tennessee-born then-daughter-in-law replied, “Kinda like I’m lookin’ at you right now?”

Maryland or any where else, I hope you are crazy about the recipe for codfish cakes that you found here.