Today I am adding a link to Food Bloggers’ ‘Support For Sandy‘. We are joining together to offer support by posting comfort foods we’d share with people in crisis, and to raise awareness for the continuing need for those who were in Sandy’s destructive path.

I have chosen to re-post my Savory Bread Roll-ups, which can be made quickly, frozen and thawed when needed.They are good warm or can be eaten cold, and are good for anytime from breakfast to midnight snack.
I have posted pictures of three, two with meat and one vegan version.

If bread making is your thing, make basic dough. If you have a bread machine, pull it out. If not, use frozen bread dough, (thawed, of course).

Roll into a rectangle about ¼ inch thick on a floured surface. Brush with melted butter or margarine. Spread fillings (recipes to follow), to within two inches from all sides. Fold in the short sides; roll up from one long side to another, Pinch ends and press to close. Place on a cookie or baking sheet, which has been brushed with butter or margarine,(or lined with parchment paper); curve bread roll if necessary. Slice or snip slits through top layer about 3-4 inches apart. Cover with clean kitchen towel , waxed paper or foil; let rise to double in size in a warm spot. Uncover and brush with melted butter or margarine. Bake at 325F for about 45 minutes- 1 hour, or until the bread is thoroughly browned.(Do not cook at a higher temperature; the middle will not bake).

Pepperoni or salami with mozzarella or provolone cheese

Any cheese, preferably with sautéed onions

Mixed with red or green salsa

Hummus,( regular or vegetable, or mixed with seeds) 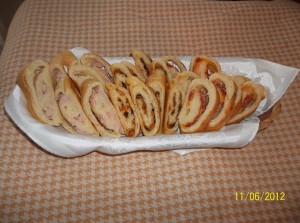 The key to low cholesterol, Lenten, vegetarian , (lacto/ovo- vegetarians who eat dairy products and eggs; lacto-vegetarians who indulge in milk and milk products),
vegan, (those who consume and use no animal products), or absolutely fool-proof, non-offensive hosting are meatless-protein combinations. Some of them are not complete proteins, but are close enough. There are several types of non-dairy milks that are readily available in your local grocery store: Soy, Rice and Almond, which I find wonderful, and can not only be substituted for milk as a drink, but in cereal,(cooked or cold), rice, whipped into potatoes, etc. Again, please ask any guest as some of these may cause allergic reactions. There are also Oat and Hemp milks on the market. I have not used these; and I need to experiment more with tofu, seitan and other non-meat proteins.
[Recipes for suggestions with asterisks will be in upcoming blogs]
Examples of non-meat protein combos are:
Beans or legumes with grains, corn (vegan)
Beans or legumes with dairy products.
Grains with dairy products.
Rice or potatoes with dairy products.
Confusing? Not really. You already eat many of them without realizing it:
Macaroni and cheese
Pasta Alfredo
Cheese ravioli or tortellini
Cheese pizza
Cheese sandwich; grilled or on plain bread, or grilled open-faced under the broiler
(Try Cheddars, Swiss, Muenster, my favorite, Gouda, or Mozzarella or Brick
sprinkled with Parmesan.)
Cheese pinwheel breads*.
Cheese tacos.
Peanut butter sandwich, or crackers. (vegan)
Bean, (vegan), (or bean and cheese) burritos.
Bean dip* and corn chips. ( without cheese or sour cream, vegan)
Red (or black) beans and rice. (vegan)
Navy or Great Northern beans and rice. (vegan)
Cheesy rice.
Rice pudding, or rice with milks, (served as breakfast in the South.)
Oatmeal, wheat or rice cereal, cooked in milks.
Dry cereal in milks.
Cream cheese on a bagel, rolls, toast or crackers. (try mixing with honey or fruit
puree).
Cheese and crackers.
Baked potatoes, with sour cream, shredded cheese ,or twice-baked potatoes*.
Potato casserole with cheese or milk-based sauce.
Potatoes, scalloped or au gratin.
Potato soup with open-faced, broiled cheese sandwich, or crackers.
Bean soup* with noodles ( non-egg, vegan) or crackers.
Lentil soup* with rice, (or popcorn instead of crackers).(vegan)
Any of the above soups with corn bread or rice (vegan)
Vegetable Pasta Salad* , (vegan)
“Breakfast” burritos,* without meat.
A tossed salad, with cubed cheese and and/or sesame seeds, (vegan) or
A tossed or layered salad with either cheese or with sesame seeds and cooked
lentils,(vegan)
Herbed Garbanzo or other beans, rehydrated bulgur wheat, cooked rice or croutons, without cheese, ( vegan)
(These can be presented in a tomato or baked into a vegetable* )(vegan)

(To rehydrate bulgur wheat, bring 1 cup of water to a boil, remove from heat and
steep ½ cup of wheat for approximately 20 minutes. Drain and cool. Add to
salad. Serves four. These salads can be a real pick- me- up. They wake Husband
up better than a cup of coffee.)
And Custard or Cheese pies, pastries, torts and blintzes . (These being made with wholesome ingredients.) There are many Mediterranean and Eastern European specialties made with cheeses, eggs, farina or other grains, which can make a light meal when served with fruit .
Maybe you have a family, regional or ethnic favorite that comes to mind when
reading this list. Use your family’s taste and your own imagination for other
combinations. Remember to be careful with the use of dairy products when trying
to avoid cholesterol, and for vegans, who eat no animal products. For all others,
don’t forget the egg, a most useful food for Lent, vegetarians, (who eat eggs,
again, ask), or if your guest avoids beef or pork.
Egg salad*, in a sandwich or stuffed in a tomato*.
Deviled eggs*, or hard-cooked eggs, sliced and on a cheese tray or in a tossed
salad.
Scramble eggs with American or cheddar cheese, tempered with a few drops of
milk. Try using picante sauce or a meatless spaghetti sauce for a surprisingly
filling meal.
Omelets with almost any type of cheese; try adding onions, (with sautéed peppers and
tomatoes for a Spanish omelet), or make frittatas*, which are basically open-faced
omelets, with white cheeses and green onions; add any herb that catches your
fancy. And if you can’t manage an omelet or frittata, or you just break one, turn
it into scrambles eggs and pass it off as if
you’d planned to make it that way. It will taste just as good, and no one will
be the wiser. ( I dropped a Bundt cake on a table just before guests arrived for
dinner. I sliced it at an angle and arranged it nicely on a serving dish. No one would have been the wiser, if my sister hadn’t decided
to make an embellished version of the story the night’s entertainment.)
All of the egg recipes above could be served with a carbohydrate; biscuits,
muffins, croissants or toast, which aid in the absorbing the protein.
Try serving something other than white sandwich bread: toast wheat, multi- grain, Italian, rye, pumpernickel, and your stand-by, raisin, make an interesting and flavorful addition. If you have a bread machine, pull it out. It is an easy way to make something that seems a little special and you have used very little effort in doing so. On the other hand, some bread recipes call for vegan no-nos: egg, milk, or honey, which is not often thought of as an animal product.
Honey is the only food that will not spoil, ( if it crystallizes, you can warm it back to perfection in a microwave or better yet, with its opened container sitting in boiling water, stirring at intervals until smooth), but should not be used by children under two, and perhaps by folks with compromised immune systems, as it can contain spores which can cause a rare type of botulism, and infant digestive tracts are not ready to render them harmless, as older, developed ones do . Science knows that honey consists of about 90 per cent sugar and 10 per cent water, but has never been able to be duplicated it, no matter what you have heard. Once, a very tipsy relative by marriage came in bearing gifts. Lifting them out of her bag, she listed them off ; among which were peanut butter, candy, flowers to plant and a jar of honey. Doing a double take before setting the honey on the table, she woozily and laboriously focused in on the label and added, “This is clover honey, not regular bee honey.” Trust me; it was bee honey. Most of the honey purchased bottled in the United States is clover honey, made from nectar collected from clover flowers, because Americans like a nice, light, mild honey spread, but bees will utilize any nearby flower. There would be no apples, pears, peaches or any fruit without pollination from bees, and therefore there are many different honeys out there, often used in food processing. So, even in eating fruit you are utilizing bee power, so give them some respect, their stingers not bee-ing the only reason. In most larger supermarkets you can find Orange blossom, buckwheat or honeys made from other pollens and nectar. Generally speaking, the darker the honey, the stronger the taste. I suggest fruit spreads, jellies, jams and margarine, ( some softened, mixed with cinnamon and sugar, vanilla ), peanut and nut butters as spreads for you vegan guests…..or, rather, their breadstuff