Hello all! Despite the order in the name of this blog, family comes first, hence the long hiatus since my last post.
I nearly simply ended my series on appetizers, but since the last was ready and the most simple, I decided to go with it.

I personally prefer to use Neufchatel, which is “light” cream cheese, but you can use any cream cheese or ‘vegan cream cheese’ made of tofu, “Go Veggie” and “Follow You Heart” which is a mix containing soy, “Daiya” brand non-dairy, non-soy alternative, (to name a few). Any of these can be easily used for any of these recipes, or in any ideas of your own to make vegan or gluten-free appetizers.

Commercial cream cheese spreads come in very many flavors. You can find sweet versions mixed with strawberry, honey, honey and nut, pineapple and even chocolate. Savory versions include chive, dill, garden vegetable and salmon, which is more versatile than you might imagine.

Along with prepared cream cheese, dips, such as spinach and bacon-and-horseradish, can be used sparingly in appetizers. These have a looser consistency and must be contained within an appetizer or spread thinly.
Of course, you can mix any flavors of your own preference into a plain base, or use the pre-made ones on their own. However, these are so simple, a little imagination added along with a few unusual flavor combinations will make a big hit with family and guests. 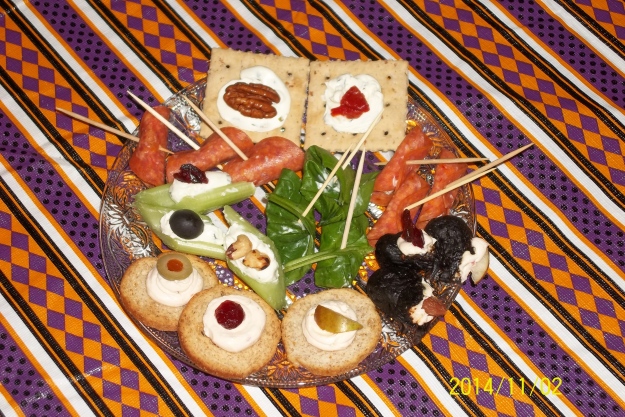 Cream cheese and vegan cream cheese based appetizers are so easy and versatile!

A recipe that was requested but that I hesitated to add was for my Liver Pâté. I will also add my vegan Mock Liver Pâté recipe. These can be a nice addition to any appetizer plate, be they spread on crackers, (topped with sour cream, cheeses or vegan alternatives, put into fresh spinach or romaine leaves slices of apple or stuffed into mission figs! Try it!)

One final word on appetizers: remember to keep the few hot appetizers I mentioned in the series as warm as possible, on a hotplate or in an electric skillet if possible. Keep all cold appetizers as cool as possible. Place some out at a time while leaving other refrigerated, or place them on plates or trays on larger trays of ice.

I do so hope this series has whetted your appetite for appetizers and that you will serve them with confidence, whether they be some of the recipes or suggestions that I offered, or some that you were inspired to make on your own.

Do you have any questions?

I invited my friend, author Edith Maxwell, to do a guest post months ago and she agreed to help me with the appetizer,/party foods I have been offering.
So here is all the info you need to whet your appetite not only for the wonderful recipe she has graciously shared with us, but for the other recipes and stories in her Local Food Mysteries, as well as her many other stories, written under several pseudonyms. I turn the blog over to Edith Maxwell. Please welcome her.

Garlic Pesto Rice Crisps
My fictional farmer, Cam Flaherty, might make these next time there’s a potluck on her farm for the volunteers, even though brown rice isn’t particularly local to New England.
This is an easy and tasty gluten-free party appetizer. Makes about fifteen crisps.

Directions:
1. Preheat oven to 400 degrees.
2. Lightly beat the egg in a small bowl.
3. Add the rice, pesto, and first cheese.
4. Oil a baking sheet with olive oil.
5. Drop a tablespoon onto the baking sheet, flattening into a round.

6. Sprinkle each round with fresh Parmesan.
7. Bake about twelve minutes, until light brown underneath and on top.
8. Serve hot. 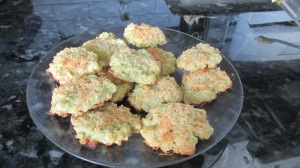 Autumn has descended on Westbury, Massachusetts, but the mood at the Farm-to-Table Dinner in Cam’s newly built barn is unseasonably chilly. Local entrepreneur Irene Burr made a lot of enemies with her plan to buy Westbury’s Old Town Hall and replace it with a textile museum–enough enemies to fill out a list of suspects when the wealthy widow turns up dead on a neighboring farm.
Even an amateur detective like Cam can figure out that one of the resident locavores went loco–at least temporarily–and settled a score with Irene. But which one? With the fall harvest upon her, Cam must sift through a bushelful of possible killers that includes Irene’s estranged stepson, her disgruntled auto mechanic, and a fellow CSA subscriber who seems suspiciously happy to have the dead woman out of the way. The closer she gets to weeding out the culprit, the more Cam feels like someone is out to cut her harvest short. But to keep her own body out of the compost pile, she’ll have to wrap this case up quickly.

Bio: ‘Til Dirt Do Us Part is the latest in best-selling author Edith Maxwell’s Local Foods Mysteries series (Kensington Publishing, 2014). Her new Country Store Mysteries, written as Maddie Day (also from Kensington), will debut with Flipped for Murder in November, 2015.
Maxwell writes the Lauren Rousseau Mysteries under the pseudonym Tace Baker, which Quaker linguistics professor Lauren Rousseau solves small-town murders (Barking Rain Press). The second book in the series, Bluffing is Murder, released in November, 2014. Edith holds a doctorate in linguistics and is a long-time member of Amesbury Friends Meeting.
Maxwell’s Carriagetown Mysteries series features Quaker midwife Rose Carroll solving mysteries in 1888 with John Greenleaf Whittier’s help. Maxwell also writes award-winning short stories.
A fourth-generation Californian and former tech writer, Maxwell lives in an antique house north of Boston with her beau and three cats. She blogs every weekday with the other Wicked Cozy Authors:  (wickedcozyauthors.com),
and you can find her at http://www.edithmaxwell.com,
@edithmaxwell, on Pinterest,
and at http://www.facebook.com/EdithMaxwellAuthor.

Thank you for joining us and helping out, Edith.